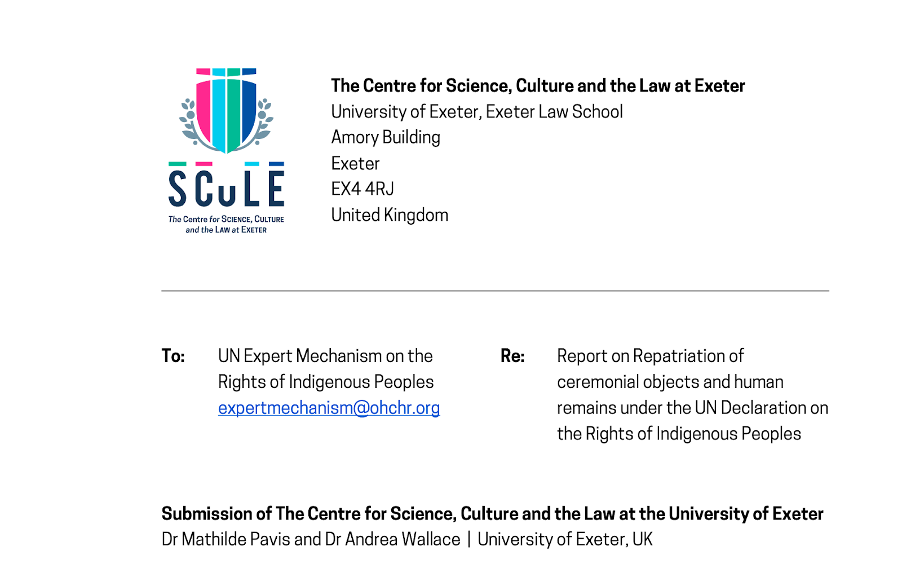 The submission to the Expert Mechanism, written by Dr Mathilde Pavis and Dr Andrea Wallace, emphasises the importance of intellectual property rights (IPR) when repatriating ceremonial objects and human remains.

Pavis and Wallace argue that IPR repatriation is essential to the implementation of the United Nations Declaration on the Rights of Indigenous Peoples. The Response outlines key aspects of IPR for states, cultural heritage institutions and Indigenous peoples and proposes a detailed strategy around IPR repatriation.

Pavis and Wallace assert that IPR should be addressed in the repatriation process to ensure compliance with the legal and equitable standards set by UNDRIP. As IPR in digitized collections or genetic materials may interfere with access to the content in question and associated knowledge, it directly affects the right of the Indigenous peoples “to maintain, control, protect and develop their cultural heritage, traditional knowledge and traditional cultural expressions, as well as the manifestations of their sciences, technologies and cultures” guaranteed by UNDRIP.

The Response argues that IPR claims and management in repatriated ceremonial objects, human remains, and associated materials should belong to the Indigenous people. Digital reproduction and open-access policies shaped by Western practices are not appropriate for this type of materials.

Projects of repatriation can integrate IPR in their strategy by implementing the following:

The Response draws on the response to the 2018 Sarr-Savoy Report on the Restitution of African Cultural Heritage Submitted to the French Ministry of Culture submitted by Dr Pavis and Dr Wallace on 25 March 2019.