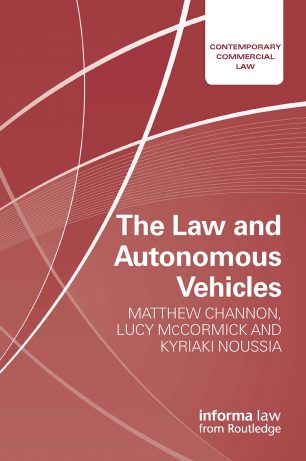 Law and Autonomous Vehicles analyses the key legal issues facing autonomous vehicles, including testing on public roads, insurance, product liability, and cyber security and data protection. It also examines the approaches in other jurisdictions, such as Austria, Germany, Greece, Italy, the USA, and South Africa.

Numerous organisations are testing fully autonomous prototypes on public roads in the UK, and even commercially available vehicles already have several ‘quasi-autonomous’ features. KPMG has forecasted that the connected and autonomous vehicles market could be worth as much as £51 billion to the British economy by 2030 and could create some 30,000 new jobs over the same period. Having in mind this data, the UK, among other jurisdictions, already implements legal reforms. The Automated and Electric Vehicles Act 2018 deals with the insurance of such vehicles, and changes are currently being made to the Road Vehicle (Construction and Use) Regulations 1986 and to the Highway Code to accommodate highly automated technologies. Non-statutory guidance in relation to testing on public roads, and in relation to vehicle cybersecurity has also been issued.

Dr Kyriaki Noussia contributed a chapter titled “International Comparisons” to the volume. The chapter examines the already implemented regulation and plans to regulate autonomous vehicles and their operation through the current or future enactment of legislation. The aim of the chapter is to detect common patters across jurisdictions in order to resolve pending issues in this area.